With policies relating to cyber security, online harms and new technologies making up less than one per cent of all parties’ manifestos (based on counting the number of keywords related to each area (see graph below) and dividing that number by the manifestos’ total number of words), it perhaps isn’t a surprise that these areas haven’t yet been talked about quite as extensively as others.

Our mission, in this increasingly connected and digitised world is to make society safer and more secure so of course we didn’t allow this to stop us looking a little bit deeper into their plans. We’ve looked at parties’ proposals for the future of cyber security and online technologies from both a qualitative and quantitative perspective. And while we have analysed all manifestos we focused on the Conservative, Labour, Liberal Democrat and SNP proposals in light of their likelihood of forming, or supporting any future UK government.

If you are interested in a full overview of parties’ proposals, we’ve pulled them all together on a single page here, which you can download from below. 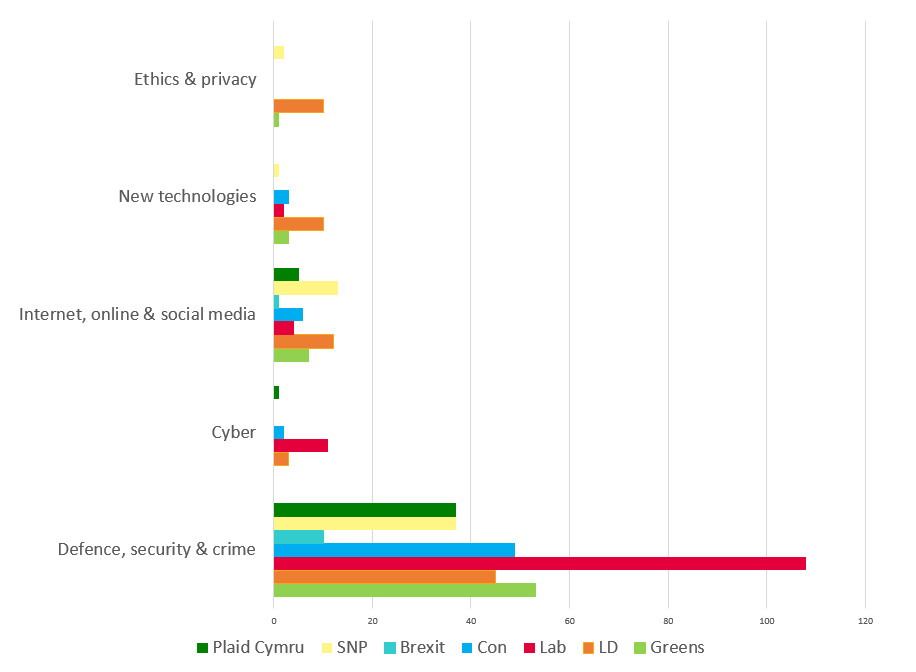 All main parties acknowledge that an increasing dependence on digital technologies has resulted in an increase of cyber vulnerabilities and threats, and ultimately the expansion of warfare into cyberspace. With cyber security a devolved matter, and a separate Cyber Resilience Action Plan in place in Scotland, the SNP does not explicitly mention cyber security in its manifesto.

Parties also discuss the importance of safeguarding democracy in an Internet age, particularly with a view to taking measures that safeguard democratic processes from foreign interference.

Having outlined the challenge, all main parties equally acknowledge that the solution to tackling it, principally requires investment in cyber security to resource, modernise, up skill and empower the police, Armed Forces and security and intelligence agencies. This notably includes the review of the National Crime Agency (NCA) to properly resource it and strengthen its powers. The Conservatives have commenced this work with the Sir Craig Mackey-led Serious and Organised Crime Review. In light of the apparent cross-party consensus, it seems a relatively safe bet to assume that reforms to the NCA will be forthcoming in the next year.

There are also a range of proposals from different parties on reviewing existing and developing new strategies, and creating new bodies, including the proposed new (Conservative) national cyber crime force which, incidentally, could well be a conclusion to emerge from a new (Labour) strategy on cyber crime and fraud. We can hope that the National Audit Office’s warnings regarding the current National Cyber Security Strategy are heeded so that any future government benchmarks the current situation, and reviews the effectiveness of current measures before committing resources to improving the situation.

Additionally, beyond high level principles, parties differ in how else they would want to get to grips with cyber crime in the future.

While the Conservatives promote policing’s (safe) use of new technologies and commit to an update of the Human Rights Act with national security in mind, the Labour Party commits to a review of security strategies to ensure their powers are used proportionately and in accordance with human rights while the Liberal Democrats make the case for halting police forces’ use of facial recognition technologies immediately. The Liberal Democrats and the SNP align in their ambition to seek a level of international consensus regarding the implications of modern technologies for the international rules-based order.

There is definitive cross-party consensus on the need to do something about online harms, with nearly all manifestos committing to legislate, and introduce a duty of care, a new regulatory regime, or a new agency to tackle online harms, implying that technology and social media companies might have to brace themselves for adopting greater responsibilities on how their platforms are used. Likewise, there is some consensus on the importance of empowering parents to support their children’s safety and privacy online. Noticeably, however, the Conservatives’ statement to balance harms with freedoms leaves room to water down the current Online Harms White Paper proposals to a, perhaps, less restrictive regime.

The Conservatives are also silent on the issue of digital rights while the Labour Party, Liberal Democrats and SNP propose measures to increase consumer rights and power over technology companies. Labour’s proposed charter would give individual’s data access and ownership rights while the Liberal Democrats recommend profit-sharing mechanisms to allow individuals to benefit from how tech companies use their data. Despite the Conservatives shying away from the topic in their manifesto, expect the issue of data ownership and rights to run and run, particularly as further data breaches come to light, and the General Data Protection Legislation is reviewed in 2020.

Finally, it is worth noting that nearly all manifestos reference the importance of new technologies, noting their future deployment in e.g. the healthcare sectors and domestic homes. There is overlap between the Conservatives and Liberal Democrats on using existing tax incentives to encourage data and cloud computing investments but difference between the parties, ultimately, on what to do with new and emerging technologies.

The Conservatives highlight the need to focus public investment in the UK’s world-leading sectors such as robotics, space and artificial intelligence, and create regulations that further promote new technologies. The Liberal Democrats focus on the importance of ethical standards in developing and deploying new technologies, for example, through the proposed Lovelace Code of Ethics to govern the use of personal data and artificial intelligence. The tension between ethics and innovation is certainly one that the new UK Government will have to find a convincing answer to before it subsequently engages in international fora where these questions will be similarly front of mind.

What this ultimately tells us is that, irrespective of the outcome of the General Election, we can expect increased investment in cyber security, a revision of the current law enforcement structures to strengthen the state response towards cyber crime, a new regulatory regime addressing online harms, and a drive to make the most out of new and emerging technologies. This provides a strong foundation for political parties, and the public and private sector to find sufficient common ground to work in partnership to tackle the challenges of the 21st century.

Nevertheless, the devil will be in the detail. Despite principally similar ambitions, what is less clear is how questions of principle will be solved, for example where individual rights are pitted against national security; or ethics conflict with innovation and productivity.

As representatives of the UK cyber security industry, our role will be to ensure that the parties don’t forget their pledge to increase investment in and effectiveness of cyber security policies in the UK amidst the 99% of other policy commitments contained in their plans for the future. And we will want to work with any future government to ensure that the concrete implementation plans below their high level commitments contain a clear role for the expertise and experience of the cyber security industry to support the fight against cyber crime.

The government has published a progress report on its National Cyber Security Strategy (NCSS) 2016-21, which reflects on the successes of the strategy so far, and what lies ahead post-2021.

The only way is (Cyber)Up: bringing the UK’s cyber crime laws into the 21st Century

The Criminal Law Reform Now Network (CLRNN) has launched an independent report which calls for an urgent reform of the Computer Misuse Act (CMA) 1990, the legislation that effectively governs the UK’s cyber security industry today.   NCC Group, alongside other industry specialists, acted as expert editors for the report and will be supporting its parliamentary launch in the House of Commons.

In a world where we’re confused as to whether we feel safer having our children playing out on the street, or in their bedroom with access to almost the entire population, what can we do to protect them? Here are a few basic tips that can make a huge difference.